“The Dharma can’t be lost, nothing is lost on a well-worn path.”

Dharma Bums is a relentlessly optimistic book, where enlightenment is there at the top of the mountain, just over the bend. The hard work it would take to get there was an unplanned byproduct of the journey, and Kerouac didn’t linger long over these challenges. Sit and meditate, maybe pass around a cheap bottle of wine, or a joint. It was all good. They were on a mission from god, after all.

Jack Kerouac and his Zen adventurers were looking beyond the dreary world of work, reflecting the disaffection the Beat Generation felt toward the consumer society they were inheriting. Kerouac wrote dismissively of creeping commercialism, and the worship of shiny new things:

“Dharma Bums refusing to subscribe to the general demand that they consume production and therefore have to work for the privilege of consuming, all that crap they didn’t really want anyway such as refrigerators, TV sets, cars, at least new fancy cars, certain hair oils and deodorants and general junk you finally always see a week later in the garbage anyway, all of them imprisoned in a system of work, produce, consume, work, produce, consume…”

Obviously the Beats’ protest didn’t rally a nation, since the consumer society is alive and well. We’ve produced and consumed all those products and more. The same market that underpins this consumer society also is at work in the Tai Chi and Qigong fields, which is why more practices are springing up in communities around the country. Approximately 3 million Americans now practice Tai Chi, according to government surveys.

Still, it’s a lot more difficult to find studios for Tai Chi than for yoga, its energy exercise cousin, which caters to some 10 percent of the U.S. population and has created a $27 billion industry. The search for training has created a new kind of Dharma Bum, Tai Chi enthusiasts who, plugged into social media, are looking for the nearest training program. A recent fellow student in a Qigong workshop in suburban Washington, D.C., had traveled from North Dakota, and previously had moved to Oregon to find a teacher.

Thus, there is a spiritual quest among the New Dharma Bums similar to that experienced by Kerouac and his friends as they rushed up the mountain for certain enlightenment. Where will I find a teacher to guide me to the top of the mountain, to find the inner strength, balance and peace promised in the literature of this Taoist martial art, this moving meditation? 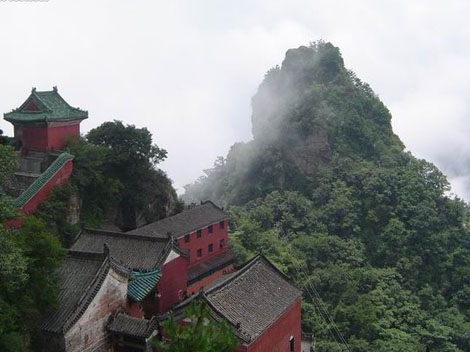 Tai Chi may have originated on WuDang mountain in the 12th century when, according to legend, Taoist sage Chang San Feng witnessed a deadly fight between a crane and a snake.

In communities across America, Tai Chi teachers are seeking to meet this demand by building practices that straddle the rec centers and the senior centers, balancing the martial art with the exercise and breathing therapy. Some even couple their training with yoga and pilates, or acupuncture and herbal treatments. Tai Chi and Qigong are different things to different people, depending on their goals.

My training was focused on Tai Chi and Qigong for health, and not on the martial qualities of the art. But as my Internet friends remind me repeatedly, the internal strength and vitality that comes from Tai Chi were developed in the context of the martial art. To get the most benefit, you must transform your body through regular and rigorous exercise drawn from centuries of martial arts training.

For those interested in using Tai Chi for self-defense, the simple application from a Tai Chi posture (shown in the video below) gives you an idea of the potential of the “soft” martial art.

My journey in search of the New Dharma Bums will focus on many directions, even as we settle on a path across the country. I hope this blog will serve as a resource and gateway to training no matter what your specific interest. You will learn it all on this trip — Tai Chi and Qigong for health, self-defense or consciousness-raising. Like the original Dharma Bums, we will leave no stone unturned.

Find out how you can get involved here.

4 thoughts on “Finding Your Path”