As promised, we are resuming the journey to the West, following the ardent steps of Jack Kerouac and his disaffected Beat Generation – still searching for our place in the cosmic order, dharma in the modern world. A new breed of “Dharma Bums” has risen in the United States around the Taoist martial arts, and particularly Tai Chi and Qigong, and they are pointing the way to new vitality, strength and inner peace available to all comers.

So come on along. For those who are new to this blog, you can catch up with this literary adventure by reviewing some preliminaries, including the original proposal that launched the unsuccessful Kickstarter campaign. I’ve always intended to forge ahead, no matter what the outcome of that project.

Without the Kickstarter funding, however, this month-long trip will be less extensive than we imagined at the beginning. It will be exhaustive nonetheless, and give us the opportunity to explore the modern applications of these ancient Chinese arts, as well as the fascinating people who teach and practice them.

On this first leg, we will go to the Mountain, which will bring good fortune according the I Ching, the ancient Book of Changes. That was the revelation for me when I consulted the oracle through the I Ching – hexagram 44, Nourishment, with the image of thunder or arousing at the foot of the mountain. I am cautioned to be careful with my words and with what I consume, which is valuable advice for a writer following in the footsteps of that wild and crazy Jack Kerouac. And I should seek guidance and help from others. Perfect!

A second hexagram, No. 9, Innocence, is the image of thunder or arousing under heaven and promises “supreme success” if I am true to my nature, and follow the spiritual path. Taoism is a spiritual path that connects the human body and mind to the universe, and I intend to stay on this path, finding other like-minded seekers.

Allen Ginsberg and William Burroughs at Naropa University in 1976.

The Mountain – in this case, Boulder, Colorado – is home to Naropa University and the Jack Kerouac School of Disembodied Poetics, named by Beat poet Allen Ginsberg and previously staffed by Beat legends like poet Gary Snyder, who was Kerouac’s muse in “The Dharma Bums.” Writer William Burroughs also haunted Naropa during its seminal years in the early to mid-70s.

Boulder is also home to my friend Lee Fife, a Tai Chi and Qigong instructor who is promising intensive practice in Tai Chi and sword forms, as well as meditation and insightful discussions into the evolution of Chinese martial arts, and the Beat Generation, in the United States. Lee teaches in his own studio, and at Naropa University.

On the way to that Rocky Mountain high, where Neal Cassady grew up and first hitched a ride with Kerouac, we will visit other hopping Tai Chi places and meet the fascinating people who are guiding the Qigong experience in America. Included among these is Bill Douglas, the founder of World Tai Chi and Qigong Day and World Health Day, who has devoted his life to spreading the good word about the health and emotional benefits of Tai Chi. 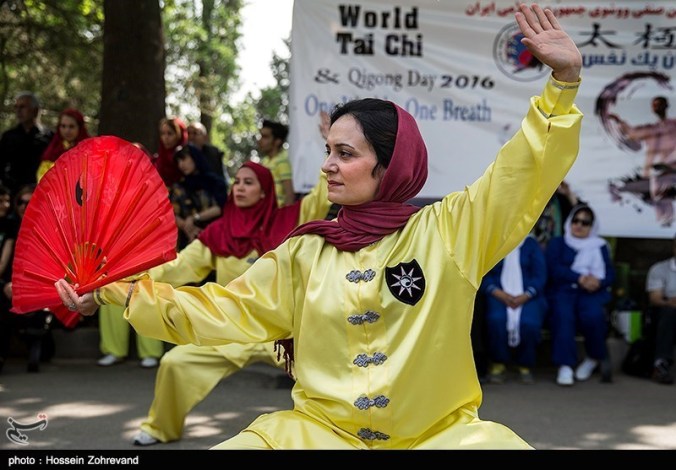 World Tai Chi and Qigong Day this year made an appearance in Iran, one of nearly 80 countries that have observed this event, running annually since 1998.

Douglas credits Tai Chi and “breathing lessons” for helping him turn away from drugs and despair to find his true calling in becoming a missionary for Tai Chi, Qigong and Taoist meditation around the world. Perhaps no American has done so much to spread the gospel of Tai Chi and Qigong – in government auditoriums and hospitals, in churches, mosques and temples, and even behind prison walls – not only to Americans but to seekers across the globe.

There will be adventures beyond Boulder, as well, but not further West. We are saving the West Coast for another adventure, a second leg on our journey in search of the New Dharma Bums, sometime next year. Besides chronicling the story for the Tai Chi community through this blog, I also hope to expand the story through the media in the areas I visit. So many great stories, so little attention by the media!

Let’s start a new conversation. Breathe deep and let go. That’s lesson No. 1. Come on the road with the New Dharma Bums. I will blog several times a week beginning next week. Let us know what you think.

6 thoughts on “We Go to the Mountain”