When you walk into the Chinese Temple display at Kansas City’s Nelson-Atkins Art Museum you can literally feel its power, if you stop and breathe it in.  Before you is a larger-than-life figure perched on the tree trunk from which it is carved – an enlightened Bodhisattva of the Buddhist tradition who resists nirvana to help others learn, a powerful monk. This is the pivotal work in the permanent exhibition, “Guanyin of the Southern Sea,” set against a full-wall mural of Buddha and his Bodhisattva attendants. Carved Bodhisattva stand silently against the side walls, peering intently across the void.

The Bodhisattva behind the gate at the Guanyin of the Southern Sea exhibit.

For my friend Bruce Hayden, the exhibit is easily worth the hour-long drive from Topeka, Kansas, to feel the power of the exhibit. He’s taken the tour a half-dozen times. “It’s a beautiful representation of Chinese spirituality,” he said. “It is one of the most powerful shrines I’ve ever seen. You can feel the qi when you walk into the room.”

A Bodhisattva in another century strikes a meditative pose.

By “qi,” Hayden means “energy,” probably the best translation for the Chinese word that is at the heart of the Taoist martial arts.  Tai Chi practitioners seek to channel qi through their bodies to heal and strengthen, to give their lives new energy and vitality. Your internal energy can be stimulated by external forces, such as a shrine created to store and yield qi.  So these art treasures, lovingly restored and maintained, are presented with an abundance of spiritual power. For the bagua player, a special treat: Look up at the ceiling and you will see dragons in bagua formation.

The most striking religious images – Buddhist and Hindu – are in the Indian exhibits, with the range of colorful and many-appendage gods. Spiritual art works also came from different southeast Asian nations, including Thailand.

Other sculptures celebrate life in ancient times, including a few ribald pokes at the Middle Asian traders along the Silk Road in the 3rd to 5th centuries, long before the Guanyin polychrome wood figures were carved in the 11th and 12th centuries, still ancient. One of my favorites is a carving of an early orchestra, with three different reeds and three drums, arranged in a procession, like a “second line.” There are jade and bronze carvings, and beautiful ceramics – not to mention the centuries of paintings. 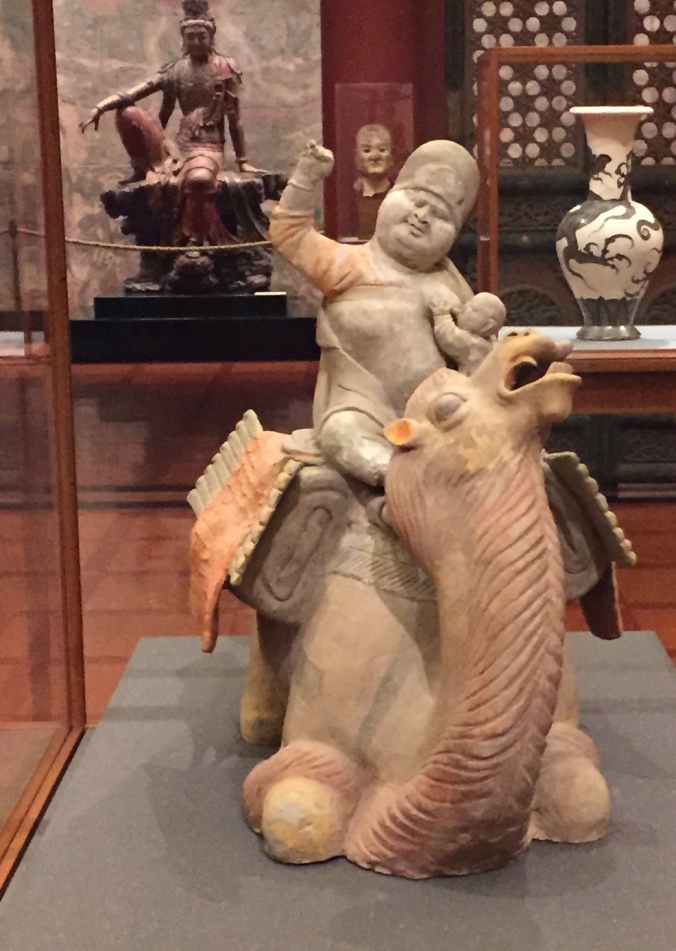 Chinese artists presented Middle Asian traders on the Silk Road in a less than flattering way. This woman is nursing an infant while taking grief from her camel. At rear, the Bodhisattva.

The permanent Asian art display is but one small wing of the vast Nelson-Atkins offerings. The museum, on Oak Street near the downtown Plaza, is striking on the outside for the sculpture of a giant badminton shuttlecock, which lies on the spacious south lawn adjacent to the outdoor sculpture garden.

The south lawn also was the site in 1998 for the very first observance of World Tai Chi and Qigong Day, Bill Douglas’s ambitious campaign to take Tai Chi around the globe. That global campaign to spread the power, peace and healing energy of Tai Chi is still going strong, with Douglas and his wife Angela the primary impetus to spread the good news. More about their story later this week.

If you’re going to Kansas City, you may want to check out the art museums – not only the Nelson-Atkins, but also the Kemper Museum of Contemporary Art, which is only two blocks away. If art isn’t your thing, you can choose between the National Museum of Toys and the National World War I Museum. And if you dig Kansas City, don’t miss the Kansas City Museum, which tracks the history and culture of the city.

Another energized “Bodhisattva” came to Kansas City earlier back in the summer and, appropriately, this is how I learned what the word meant. After hearing this song way back when, I had to look it up.